There is an old Slovak proverb: “A goat, a birch and woman do not belong in the forest.”


Well. That proverb was tested—and trashed—by a conference I recently had the privilege of attending, in Bratislava, Slovakia on the theme “Women and Sustainable Hunting: Experience, Nowadays and Future.” The conference was organized by the Club of Slovak Ladies Hunters, under the auspices of the International Council for Game and Wildlife Conservation (CIC—for Conseil International de la Chasse). An international gathering of female hunters on this scale was a first. Its goal was twofold: to bring together female hunters from a variety of national and cultural contexts, to compare their experiences and perspectives on sustainable hunting; and to celebrate the inauguration of “Artemis,” an international organization of women hunters established as a free-standing CIC working group. I was thrilled to be invited to bring a US perspective to what turned out to be a fascinating three days of presentations and conversation. And I was beyond thrilled when Sonja Sukepova, the  president of the Slovak Ladies Hunters Club and conference organizer, invited me to stay on for a couple of extra days, to hunt red deer, mouflon and wild boar with her and her family.
About sixty women attended the conference, fourteen of us presenters. All of the presenters aside from myself were from Scandinavia, central and eastern Europe, regions where hunting traditions and rituals run deep and where—as Tamas Marghescu, the CIC Director General put it in his introductory remarks—lady hunters have long, and unfortunately, been “looked at with a little bit of suspicion.” Sounds kind of familiar to American ears, that. However, when—after remarking that women are the “biggest growth sector” in hunting worldwide and that we may quite literally be the future of hunting—Tamas went on to say he was eagerly “looking forward to crispy innovations, to open the window wide for new, strong crisp wind and energy” in the hunting world . . .well, mild jet-lag be damned, I started feeling pretty downright crispy myself. And the ensuing days of formal and informal presentations and interactions with a surprisingly diverse group of outdoorswomen ranging in age from their twenties to their seventies, and in profession from academics and attorneys to museum curators and wildlife professionals, turned out to be a breath of fresh air indeed.
This was my first on-the-ground exposure to European hunting culture. And what is immediately striking is the depth to which hunting is a culture in and of itself there. As Marghescu put it, “Hunting is not a hobby, it is a lifestyle.” While many hunters on this side of the Atlantic might readily agree with that assertion, I think most Americans (the ones I’ve spoken with over the years, anyway) fail to grasp the essential role played by European customs that we often tend to write off as quaint “remnants” of an earlier time: the ritual of the hunting horn, the bit of grass or forage placed in the mouth of the freshly slain animal, the extensive artistic and crafts traditions relating to the hunt, the sartorial tradition of hunting clothing not simply for the field but for business and dressy occasions. Indeed, in the latter regard, this was the most fashionably turned-out hunting conference I’ve ever attended. Here is a group photo from the evening of the gala dinner, showing several women in traditional hunting formal wear (that’s yours truly in a standard American little black dress kneeling farthest to the left): 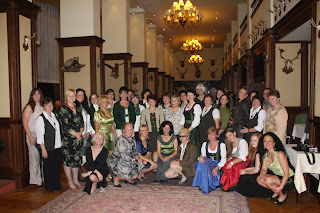 And by evening’s end, what were all these stylish women talking about? Guns and shooting. Calibers and loads, preferred rifle makes and models, favorite prey animals and the best methods and places to hunt them and ways to cook them, and other such ladylike topics!
There was another theme of conversation that grabbed me, that evening and throughout the three days we shared as a group: the idea that good hunting has a religious dimension. Now, this is a familiar idea to anyone who knows Yale sociologist Stephen Kellert’s groundbreaking work on hunter “types,” not to mention the work of writers like Richard Nelson, Gary Snyder, Ted Kerasote, Barry Lopez and others who have homed in on the idea that some kind of spirituality lies at the heart of hunting.  But, and not surprisingly given our own cultural history, there is invariably something deeply—dare I say ruggedly?—individualistic about American approaches to what Kellert developed in his “nature hunter” model.  By contrast, virtually every statement I heard about hunting from the women in Europe had a distinctly communitarian ring to it: hunting is not only a lifestyle, it is a communal way of life that people share intimately with one another, and that must be passed from one generation to the next. And it was generally agreed among the conference participants that more than ever before this matter of cultural transmission is women’s work. It is time, as Tibor Lebocky, head of the Slovak Hunter’s Chamber phrased it, to “build a new history for hunting in the future.” And this is what Artemis, the international women’s hunting club, hopes to be all about.
I was especially impressed by the way this communal emphasis played out in the various presentations on what women’s hunting clubs—and such clubs are far more common on the national and local levels in Europe than in the US—embrace as their primary activities and goals. Again and again, women from Norway and Denmark , Latvia and Russia, Italy and the Czech Republic and Hungary and Slovakia and Austria sounded common goals and described projects dedicated to achieving them. The goals had to do primarily with educating the non-hunting public about nature, wildlife conservation and sustainability: objectives that certainly rang true to my American ears.
But it was the array, and consistency across national boundaries, of methods for achieving these goals that struck me as refreshingly constructive and broadly forward-thinking.  While there were regional variations, every presenter stressed the following:
·         First and foremost, working with children. Several clubs already operate summer camps, for children ranging from kindergarten to their teens. There was consensus that these camps should be international in their make-up, to ensure cross-cultural communication as well as to instill awareness of and active participation in nature through numerous hands-on activities ranging from dog handling and photography to fishing, sport shooting and falconry.
·         Developing a media strategy to improve public perceptions of hunting. Interestingly, while the goal is to educate the public about the connection(s) between hunting and sustainability, the methods cited were largely—and I believe brilliantly—aesthetic rather than scientific: photography and documentary filmmaking competitions, art and jewelry exhibits, museum displays, concerts, game feasts.
·         Improving public opinion of hunting and hunters through philanthropic activities. Several speakers stressed the importance of charitable work—with the poor, the sick, the disenfranchised—as an essential piece of a broader consciousness about the hunter’s role in society.
Of course, these national and regional women’s hunting clubs also focused on hunter education and skills training in ways not dissimilar from the US’s “Becoming an Outdoors-Woman” (BOW) program. And they are in some cases facing the same barriers to women’s participation in outdoor sports as we do here: access to hunting areas, networking among women hunters and retention of hunters beyond the “novice” phase, overcoming cultural stereotypes about hunting as an “unfeminine” activity, and just plain finding the time as well as the places to hunt.  Additionally, in nearly every European context women form a smaller percentage of the hunting population than we do here in the States. But there, as here, female hunter numbers appear to be growing steadily.
And it struck me that these European women’s hunting clubs see their real work as beginning where BOW’s leaves off. Let me be clear here: This is in no way intended as a criticism of BOW, which I think is a terrific program, and which in fact I talked up in my own presentation on “American Dianas: Yesterday, Today, Tomorrow.” But BOW cannot do everything that needs to be done for women’s hunting in America. And, frankly, I don’t see too much else going on out there on this side of the Pond. Such women’s hunting clubs as we do have here and there tend to be very localized, and to focus on individualistic—at times “extreme”—hunting. Programs for women operated by the likes of SCI and the NRA are often costly and appeal to a relatively small niche of the female hunting population.  I really think we need to do more, and do better. And I think our European sisters have a lot of wisdom to share, in this regard. I’m looking forward to continuing, and sharing, those conversations . . . So, to be continued.
As to those two days of hunting in Slovakia—More on that to follow! 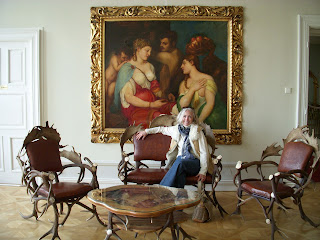 Mary Zeiss Stange is the author of Woman the Hunter (Beacon Press, 1997), Gun Women (New York University Press, 2000), and most recently Hard Grass: Life on the Crazy Woman Bison Ranch (University of New Mexico Press, 2010). She also edited Heart Shots: Women Write about Hunting (Stackpole, 2003) and Stackpole Books' "Sisters of the Hunt" series of classic works about hunting by women, and has published widely on women's and environmental issues in both the commercial and academic press. A professor of Women's Studies and Religion at Skidmore College, she teaches in the gender studies, environmental studies and international affairs programs. She divides her time between her "town job" in Saratoga Springs, NY, and the bison ranch in southeastern Montana that she and her husband Doug share with six Peruvian horses, two Springer Spaniels, a tuxedo cat and various wildlife.