On Your Own Adventures Launches Third Season on Sportsman Channel

Randy is a founding board member or Orion. This from the Outdoor Wire:
Thursday, June 9, 2011
New Berlin, WI - This summer tune-in to Sportsman Channel, the leader in outdoor TV for the American Sportsman, for a new season of On Your Own Adventures with Randy Newberg. On Your Own Adventures (OYOA) premieres its third season of shows dedicated to non-guided hunting starting Thursday, June 30 at 9:00 p.m. ET.

"Randy is a man on a mission and we are proud he chose Sportsman Channel as the new home for his one-of-a-kind series," said Gavin Harvey, CEO of Sportsman Channel. "On Your Own Adventures is real, raw, exciting and inspiring - exactly the type of authentic programming that makes Sportsman Channel the one and only true outdoor network for American Sportsmen."

On Your Own Adventures focuses on non-guided hunting, and with each action packed episode, Newberg proves that a hunter can achieve his or her dreams without any guides. OYOA encourages viewers that any hunt they see Randy doing is a hunt they can do, on public land, without the expense of private reserves and guiding services.

Newberg has a long list of highlights this season including a trip to Alaska where he demonstrates how to hunt for bear on a limited budget. Newberg also travels to New Mexico for many unforgettable whitetail and elk archery hunts - including one spectacular adventure where Newberg arrowed an elk from two yards!

Newberg posts his hunts as they happen, live, on his website. The Hunt Talk forums at www.OnYourOwnAdventures.com, are filled with some of the greatest stories and pictures of America's most hard-core western hunters. These are hunters who are living the On Your Own life, and sharing information and ideas to help others wanting to learn more about On Your Own hunting.

"This season of On Your Own Adventures is off the charts and as good as anything we've ever done," said host and producer, Newberg. "Sportsman Channel sought out On Your Own Adventures for the programming we bring, the audience we deliver, and the quality of our production. We embraced Sportsman Channel for the quality of their organization and their engaged viewers.

Randy Newberg lives in Bozeman, Montana, where he and his family have spent the last twenty years chasing western game on the public lands of the Northern Rockies. Originally from northern Minnesota, Randy comes from a family and culture of serious hunters - On Your Own Hunters who understand that the importance of hunting is the hunt itself. Time in the field with family and friends, living the hunting lifestyle, and dedicating himself to conservation efforts is what Randy's life is all about - a lifestyle he brings to On Your Own Adventures.

Labels: On Your Own Adventures, Randy Newberg, Sportsman Channel

Written by Lawrence Pyne, for the Free Press

Hallelujah! Pete the Moose is saved once again! Only this time, the good news is legislators were actually more concerned about protecting Vermont's wildlife and democratic hunting tradition than they were one misbegotten bull.

Conceding that he and other lawmakers made a mistake last year, Gov. Peter Shumlin signed into law Wednesday legislation that nullifies an amendment a few legislators put into the annual appropriations bill in the final hours of the 2010 session. That amendment stripped the state Fish and Wildlife Department of its authority to regulate a so-called "captive hunting facility" in Irasburg and, worse, it essentially transferred ownership of Pete and scores of other native moose and white-tailed deer trapped in the facility to its owner. He was then free to sell them to the highest rifle-toting bidder, despite a state Fish and Wildlife Board rule crafted with legislative oversight and considerable public input that forbids having native deer in a captive facility for wildlife health reasons.

The bill the governor signed Wednesday, H.91, not only overturned those provisions, but it also goes two significant steps further: It mandates that, with the exception of Pete, all the moose and whitetails in the high-fence facility be killed within three years, which is the only way to ensure that infectious diseases spread by non-native elk and red deer do not enter native populations; and it set in law once and for all that, "the fish and wildlife of Vermont are held in trust by the state for the benefit of the citizens of Vermont and shall not be reduced to private ownership."

That the 2010 law was nullified so quickly is a tribute to Shumlin and many other legislators, who openly regretted being duped by a "Save Pete the Moose" campaign that benefitted the owner of the Irasburg facility more than it did one photogenic moose -- a moose that was not only illegally taken from the wild, it somehow conveniently became a social media darling.

Credit also goes to Fish and Wildlife commissioner Patrick Berry and House Fish, Wildlife and Water Resources Committee clerk Kate Webb, D-Shelburne, who shepherded H.91 through the Legislature. And last but not least, kudos go to the many hunters and other wildlife advocates who worked since last summer to have the 2010 law overturned.

Ironically, what a few legislators surreptitiously did last year for the benefit of one private landowner in the end actually helped safeguard the health and public ownership of all wildlife."It was a bad law done badly, with all the last-minute, backroom stuff," said Eric Nuse of Johnson, a retired game warden who helped organize a coalition of hunting and environmental groups in support of H.91. "That made it a lot easier for legislators and other folks to get behind a good bill, even if it means killing some deer and moose that got trapped behind a fence through no fault of their own." 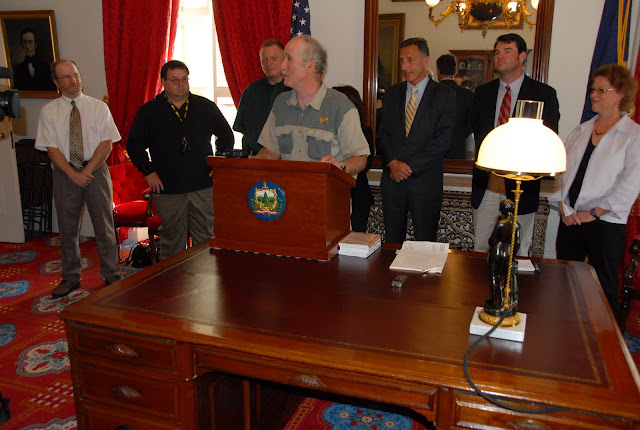 Mark Zuckerberg's new challenge: Eating only what he kills (and yes, we do mean literally...)

Last year Mark Zuckerberg set out to learn Chinese. Now he's determined to get in touch with his food. If the goats, lobsters and chickens of Silicon Valley aren't trembling, they should be.

The eyes of a hunter.
When he's not too busy connecting people across the universe, Mark Zuckerberg is pursuing a new "personal challenge," as he calls it. "The only meat I'm eating is from animals I've killed myself," says the Facebook founder and CEO.
It's an odd dietary direction for the 27-year-old Internet billionaire, but since he has taken to killing goats, pigs and chickens, "I'm eating a lot healthier foods. And I've learned a lot about sustainable farming and raising of animals," he says. "It's easy to take the food we eat for granted when we can eat good things every day."
....After the lobster, the next animal to fall at his hands was a chicken. What's next on this journey? He's told people that he's interested in going hunting.
read full article
Posted by Eric C. Nuse at 9:09 AM 2 comments: