From my friend Tovar Cerulli:

...Ardent wolf fandom and ire do not surprise Ed Bangs, the federal Fish and Wildlife Service’s recently retired wolf recovery coordinator. “When wolves come back, one side says it’s the end of civilization, our children will be dragged down at the bus stop,” he said. “The other side thinks nature is finally back in balance and can we all have a group hug now.”
California will see the same divisions, said Mr. Bangs, who in his 30 years in gray wolf management attended hundreds of contentious meetings with residents, ranchers and environmentalists.
“I like to say wolves are boring,” he said, “but people are fascinating.” 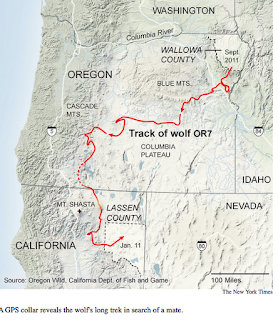 Wild Hogs and the Role of Hunters

Wild hogs in the woods

Wildlife and agriculture officials take a stand in the mud to ferret out feral pigs from pockets of the Wisconsin countryside.

Feral pigs have gained a foothold in 23 states, including Wisconsin, mostly in Crawford and LaCrosse counties.

From California Fish and Wildlife:

The relationship between California residents and wild pigs could be described as “love/hate.” That is, hunters love them while everyone else seems to hate them. Classified as a game mammal in California, wild pigs provide year-round hunting opportunity.


From the Washington Examiner:

Montana is looking to recreational hunters for help in enforcing more of its wildlife management policies, but one regulator worries they are being asked to cross an ethical line in doing so.
The question is whether the state is unwittingly putting those hunters in a fix: Does their new role fall within ethical hunting guidelines or does it reduce them to wildlife management mercenaries whose actions could give hunting a black eye?
That's the concern of Fish, Wildlife and Parks commissioner Ron Moody, who recently questioned whether the agency's policies and proposals are asking hunters disregard what it means to be an ethical hunter.
...The man who wrote the book on ethical and fair-chase hunting, Jim Posewitz, said public perception is very important for hunters. The FWP's use of hunters to enforce wildlife management policies can work, provided the agency uses the right hunters, he said.
FWP should provide training so the hunters used have an understanding of the last century's conservation efforts in North America and also understand that the overall goal is to have sustainable, manageable wildlife populations, he said.
"We need to make sure they're very elite and a very respected group of hunters. We're not sending out assassins or SWAT teams. We are sending out sensitive, trained hunters to handle a very sensitive situation," Posewitz said.
Aasheim said additional hunting training has previously been suggested, but has not been implemented. Currently, the state provides a basic hunter education course and each person who participates in the annual bison hunt receives a 30-minute DVD that discusses ethics and hunting, he said.
Posewitz worked for the FWP for 32 years and founded Orion — The Hunters Institute, an organization that advocates for ethical hunting. More than 600,000 copies of his book, "Beyond Fair Chase: The Ethic and Tradition of Hunting" have been handed out as part of hunter-education programs.
He cited Helena's program to control urban deer as a model of how it can be done right. Each year, the city receives authorization from FWP to kill a number of deer to maintain a manageable density of animals within the city. This year, that number is 220.
"They're not out there liquidating the deer. They're keeping the deer in balance with the carrying capacity of the city, and they're doing an excellent job of that," Posewitz said.

A Murder at Paradise

From the New York Times By TIMOTHY EGAN
PARKLAND, Wa. — The next time somebody mindlessly bashes a “federal bureaucrat,” as if the term itself were a parasitic disease, remember the bright young woman we said goodbye to here a few days ago: Margaret Anderson, a park ranger in a flag-draped casket.
...The other point worth noting is about how selfless and valuable so many public employees are — especially those who work the parks, forests, deserts and wildlife refuges owned by every citizen. The hours are torturous, and the rewards inconsistent.
more:
Posted by Eric C. Nuse at 9:01 AM 2 comments:

A recent study done by Responsive Management titled, Issues Related to Hunting Access in the United States, indicated that difficulty gaining access to lands for hunting has become a constraint to recruiting and retaining sportsmen. Adequate access to land is one of the fundamental issues that affect the future of hunting.
The survey asked hunters about possible reasons that landowners may close their land to public hunting. The top three related to the misuse of the land: irresponsible shooting, alcohol use, or other bad behavior by hunters. Other top reasons cited were property damage caused by hunters; litter;landowner wanting to allow only personal/family use of the land; and liability concerns.
Unfortunately asking landowners that have closed their land was not within the scope of this study. My reading over the years points to landowners wanting to be in control of what goes on on their land and the only way currently open to them is posting.
Posted by Eric C. Nuse at 2:42 PM 9 comments:

The Meaning of Meat: Adult-Onset Hunters Look to the Land for Sustenance


From http://northernwoodlands.org/ by Tovar Cerulli
As a teenager, Deborah Perkins found hunting repulsive. During her years at Greely High School in Cumberland, Maine, she wrote a passionate essay arguing that the pursuit was morally wrong. Two decades later – now living 25 miles north, in Poland, and working as a consulting wildlife biologist – she hunts grouse, turkey, and deer.
more:
Posted by Eric C. Nuse at 9:08 PM 1 comment:

A hearty New Year’s cheer from all of us here at Orion-The Hunters’ Institute to you and yours.

With all the problems in the world and hard times here at home, it is easy to get a bit gloomy - not to mention the fact that most hunting seasons are over until spring.

However, as I look back on 2011 there are many accomplishments to be proud of:

·      The concept of fair chase is now common knowledge, as evidenced by the passing of the 600,000 sales mark of Jim Posewitz’s classic Beyond Fair Chase
·      Wildlife as a public trust resource was restored and strengthened in a state legislative battle coordinated by Orion that has positive national ramifications
·      Hunting Think Tank II was successfully held at the Max McGraw Wildlife Center with support from McGraw, the Pope and Young Club and a great group of deep thinkers
·      Our Fair Chase Hunting blog is averaging over 2,000 page views per month
·      The Orion message of ethical hunting is being wonderfully portrayed on the normally dismal TV hunting channels through Randy Newberg’s On Your Own Adventures show
·      Founder Jim Posewitz has published a new book, Taking A Bullet for Conservation, The Bull Moose  Party- A Centennial Reflection 1912-2012
·      Poz is also engaged in an effort to restore a free ranging, huntable bison population on 3 million acres of eastern Montana prairie.

The day-to-day value of Orion was summed up to me in a phone message I got last month from Leslie Kaufman, a reporter and blogger with the New York Times. She said, “I have a question about hunter ethics and I was told that Orion is the place to go.”

I am optimistic about the future of hunting and the role of hunters in wildlife conservation and look forward to more successes in 2012.

Wishing you a productive and successful 2012!