Depredation Hunting As A Commercial Concern 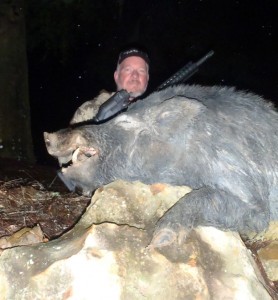 In which I once again open a door that I might wish had stayed closed...

It's an interesting conundrum.

Feral (wild) hogs are devastating farm crops from North Carolina to California and most points south of that line.  It won't be long before they're causing similar issues in the upper midwest as well.  That's pretty irrefutable.  A relatively small sounder can wreak havoc on a freshly planted corn field.  They'll mow down a barley field, and whatever they don't eat they'll trample into the mud. They can till up a crop of peanuts or sweet potatoes to the point where it's barely cost effective to replant.

There are a few methods to manage these animals.  Poison is one consideration, but most poisons are indiscriminate. They tend to kill animals that you didn't really intend to kill, from coyotes and racoons to cats and dogs.  For this reason, their use is regulated and even prohibited in some locations. Recent research into sodium nitrate (the food preservative) has shown promise, but at this point it is still in the research phase.

Trapping is an efficient option.  By capturing the animals alive, the trapper is able to ensure that non-target animals are not harmed.  A properly operated trapping system, such as the M.I.N.E. (Manually Initiated Nuisance Elimination) program recommended by the guys at Jager-Pro can be particularly effective in removing entire sounders.  This is, arguably, one of the best options currently available, but it requires time and patience.  It is also very localized.  Large-scale trapping would require significant outlay for equipment, and a lot of time to manage multiple traps across a wide geographic area.

On the small scale, this method has a certain level of success.  Serious hunting pressure will drive hogs out of an area.  However, the problem here is that the hogs will re-settle on another property.  They'll also come back eventually, once the pressure has eased.  For the farmer who just needs time for his crops to take root, or time to ripen and harvest, that may be enough.  But in big farm country, like Georgia, it's not good enough to push the hogs onto your neighbor's farm.  It's not real neighborly either.

To address this, small companies have cropped up and have been offering their services to multiple farmers in an area.  This way, the depredation hunters can move with the hogs and keep the pressure up until their numbers have been reduced to a manageable level.  It's pretty much a given that the hunters won't be able to completely wipe out the population, but keeping the population in check is the goal.  They accomplish this with varying levels of success through the use of dogs, high-tech night vision, and helicopters.

But here's where it starts to get into a grey area.

Maintaining a staff, running hounds, buying night vision, and flying a chopper all cost money.  Some farmers are willing to pay a bit to the depredation teams, but others are unwilling or unable to foot the costs of this service.  Enter, the paying customer.

For many sport hunters, an outing with a depredation team offers something they don't get in an average outing.  There's generally a high level of success, and the opportunity to use the professionals' methods is alluring.  It presents a sort of no-holds-barred environment.  The hunter can shoot without limits on size or number, and he can utilize tools like high-end thermal imaging scopes, or shoot from the door of a flying helicopter.

For the depredation company, the sport hunters are a source of additional income to help pay the expenses of the operation.  For the more successful companies, "guiding" hunters may even provide a profit.  Well-managed with a solid clientele, the arrangement can even become pretty lucrative... as long as the hogs hold out.

It raises a couple of valid ethical questions.

First of all, some people question the ethics of sport hunters participating in an activity simply for the thrill of killing more animals, especially when they're using means that would typically not suit accepted, sport hunting practices.  Shooting from the helicopters, for example, pretty much eliminates any pretense of Fair Chase.  Likewise, hunting at night with thermal-imaging scopes and semi-automatic rifles stuffed with high-capacity magazines wouldn't seem like much of a challenge.

There's also the reality that neither method is known for quick, clean kills... nor is there much opportunity (or effort) for tracking and finishing wounded animals.  Firing rapidly at a scattering herd and trying to knock down as many animals as possible before they clear the field is guaranteed to result in a significant amount of wounding.

Of course, logically, most of us recognize that this is eradication.  One must necessarily adopt the mindset of the exterminator, and treat the target animals as nothing more than cockroaches or mice.  To the pest control expert, killing is killing, whether death occurs rapidly or slowly.  The end game is to remove as many pests as possible from the customer's property. He doesn't necessarily think of the creatures as sentient beings, and he seldom takes the time to take a close look at the outcomes of his actions.

So is it wrong to sell this experience to customers who are paying for the excitement... for the thrill of killing indiscriminately?  Is it wrong for the customers to find the experience thrilling in the first place?  What kind of person would pay for the opportunity to do this?  How can someone actually do this and find it fun?

It is, at the very least, a challenge to the narrative presented by most hunting apologists who would create the myth of the thoughtful hunter... of the connected sportsman who feels deeply about the animals he pursues and the sanctity of the chase.  It blurs the image of the ethical paragon (if such a person ever existed in the first place), overlaying it with the grinning, bloodthirsty killer of Cleveland Amory's nightmare. Which is real? How do we reconcile?  Is it necessary to try?