Profile of a responsible hunter 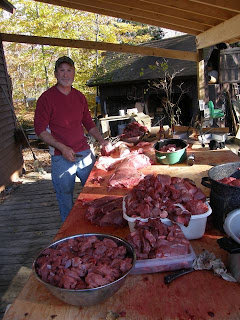 We've all seen slob hunters - similar to the description of pornography by one of our Supreme Court Justices - "you know it when you see it". That is one extreme, but what criteria needs to be met to be a responsible hunter? We all think we are one, but are we?

Here is my opinion of the criteria that needs to be met:

1) Safe - bottom line is you must follow the safety rules for gun handling and hunting. If you endanger yourself, others or property you are not a responsible hunter.

2) Lawful - Game laws can be complicated and tempting to bend or break. But they have a vital purpose and must be followed to the letter and spirit.

3) Clean Kill - Responsible hunters only shoot at game they know they can kill, not to see if they can hit it. Stuff happens, but we do everything we can to make one-shot kills. Excuses like I didn't have time to sight in, or practice or check my pattern don't make it. Taking shots byond your ability to hit the vital area, moving shots if you are proficient at them and high risk angle shots are other no-no's. Among the worst are the "bowhunters" who brag about sticking deer - ahhhh - a great way to lose hunting.

4) Full Utilization - If you kill it; you (or someone else) eat it. If you don't like mergansers and don't know anyone who does - don't shoot them. For game like moose, it takes planning ahead to be sure you can get it out of the woods and cool it down before it spoils, not as easy as you might think. The exception to this rule is damage shooting. But that is different than hunting and I still think the critter should be used if at all possible, even if it is just cleaning the coyote skull for the local Boy Scout troop.

5) Practice Fair Chase - If it is a 100% guaranteed kill or the animal can't get away, it is not an ethical hunt. The outcome of the hunt must be in doubt up to the instant the trigger is pulled. Anything else is just shooting or slaughtering. Within this definition is lots of room and it will vary between hunters and even for the same hunter at different times of their lives.

There is inherent conflict between fair chase and clean kill. If you erect to high a barrier to harvest, say using a homemade stick bow, you could without a lot of discipline, set your self up for wounding animals because your skill level is not high enough to be successful under reasonable conditions. More on fair chase and hunter preference in future posts!

6) Support Conservation – This applies primarily to more experienced hunters. I don’t think you can call yourself a responsible hunter unless you are actively supporting wildlife conservation beyond buying licenses and paying tax on equipment and ammo. We need to be in the arena supporting scientific management and environmentally sound policies both politically, physically and monetarily.

I also don’t think paying dues to a hunting club or conservation organization is enough. It is a great start but not enough. We need to be actively engaged with that club, doing habitat work on the ground and making those phone calls to legislators. It also means building support for conservation and hunting, like taking a kid hunting and showing the neighbor kids how to read sign.

As you can see, I think there is more to being a responsible hunter than what happens at the instant you touch the trigger. All of this together is what makes hunting such an engaging and ever new and challenging activity.

I’d love to hear your thoughts ….

Good news for Vermont and our wildlife. The VT Fish and Wildlife Board has passed the rule defining how captive (canned) big game hunting operations can function in Vermont. The really good news is it bans any new facilities. According to Department sources six other groups were considering starting operations in Vermont. This would have meant huge amounts of land fenced off for from democratic hunting and native wildlife; not to mention the disease threat to our whitetail deer herd from things like chronic wasting disease and bovine TB.
Congratulations to the hard working members of the FW Board for sticking it out and doing the right thing!
Now we need to stop the expansion of all domestic deer and elk farming operations and sunset the existing ones. The small economic gain for so few farmers does not off-set the risk to our wildlife and the hunting/wildlife viewing industry. This will have to be done thru legislation and will take strong leadership.
Posted by Eric C. Nuse at 11:27 AM 2 comments:

The following rule has passed the first vote of the VT Fish and Wildlife Board. I served on a working group representing the VT Federation of Sportsmen's clubs that helped put the language together. Our wording was reworked by the FWD and then presented to the Board. It will now go out for public hearings. Dates to be announced.
Currently Vermont has only had the Federal rule dealing with migratory waterfowl wanton waste. This new rule is an attempt to set a bottom line (admittedly pretty low) for hunter behavior. It makes enforceable what is a very strong ethic among all responsible hunters to retrieve all animals shot at and fully us what you take. We did not come up with a way to deal with the few families that regularly hang big game and coyotes and let them spoil.
Look over the rule and let me know what you think:

Rule Governing the Retrieval and Utilization of Fish and Wildlife
Version 6, 12-11-08

1.1 This rule is promulgated pursuant to 10 V.S.A. §§ 4081 and 4082. In promulgating this rule, the Fish and Wildlife Board is following the policy established by the General Assembly that the protection, propagation, control, management, and conservation of fish, wildlife, and furbearing animals in this state is in the interest of the public welfare and that the safeguarding of these valuable resources for the people of the state requires a constant and continual vigilance.
1.2 In accordance with 10 V.S.A. § 4082, this rule is designed to maintain the best health, population, and utilization levels of Vermont’s wildlife.
1.3 This rule applies to all persons taking or attempting to take game, small game, and fish by hunting, fishing and trapping.

The purpose of this rule is to ensure proper retrieval and utilization of the State’s fish and wildlife resources.

3.1 “Abandon” means to take, but not retrieve, or retain in an individual’s possession, any game, small game or fish..

3.2 “Game” means game birds or game quadrupeds, or both.

3.3 “Small game” means game birds except for turkeys; game quadrupeds except for big game; furbearers and other wild animals.

3.4 “Take and taking” means pursuing, shooting, hunting, killing, capturing, trapping, snaring and all lesser acts, such as disturbing, harrying or worrying or wounding or placing, setting, drawing or using any net or other device commonly used to take animals, whether they result in the taking or not; and shall include every attempt to take and every act of assistance to every other person in taking or attempting to take fish or wild animals, provided that when taking is allowed by law, such a taking must be by lawful means and in a lawful manner.

4.1 Hunting: No person may take any game or small game species by means of hunting and abandon the carcass. A reasonable effort must be made to retrieve any taken or wounded game or small game animal and the retrieved animal must be immediately made part of the daily or seasonal bag limit. This regulation does not apply to an animal taken in accordance with 10 V.S.A. § 4828.
4.2 Fishing: No person may take any fish species by legal means and abandon it on land or on top of any frozen body of water. Any fish that is not retained as part of a person’s daily creel limit shall be returned to the water body from which it was taken, using reasonable care to keep the fish alive. This regulation does not apply to baitfish as defined in Section 5 of Title 10, Appendix Section 122.
4.3 Trapping: A person who takes a furbearing animal shall not abandon any usable pelt.
4.4 Sick or diseased animals: Sick or diseased animals may be left in place and shall be reported immediately to a representative of the Vermont Fish and Wildlife Department, including state Game Wardens.
4.5 Exemption for Crop and Property Damage: This rule does not apply to any animal taken in accordance with the following provisions
10 V.S.A. § 4826 (Deer)

(Eric's note- these last statutes deal with animals taken in defense of property and crops. They have specific provisions on how the carcass may be handled.)

Two questions arise: Do we need this rule and should coyotes be included?
1) Is a rule needed if most hunter, trappers and fishers already do everything included in the rule? I look at this as good news- compliance with written or unwritten rules of behavior is the goal of society. I and the committee felt that yes we needed enforceable rules to be able to force the few poor sportsmen to toe the line. Everything we do is under the microscope and we can't afford actions that endanger the future of our sport.
The other compelling argument is political. The legislature has been considering taking up this issue ever since the coyote hunting contests made headlines a few years ago. The commissioner has been able to hold them off because this rule has been in the works. If it does not pass, it opens the door for them to tackle it. We all know where that could go!
The other good development is the coyote contest organizers are now requiring all animals be skinned and the hides utilized.
2)The working group did not agree with the Department on including coyotes in this rule. The feeling was if Vermont does not have any closed season on them, we should not be forcing people who shoot a coyote when the hide is not prime to remove it from the field, just to through it away.
My personal opinion is we should have a closed season during the spring, summer and early fall on coyotes. Rules could be written to allow damage killing of coyotes that are harming domestic stock and for wildlife in very specific situations. The biology is very clear that killing of coyotes by conventional methods now allowed does not lower the coyote population nor does it help the prey populations to any measurable extent in normal circumstances.
Killing anything just to kill it and for no justifiable purpose is reprehensible to nearly everyone - hunters and non-hunters alike. Our hunter education courses do a good job in teaching this ethic, but a fair number of hunters turn a blind eye on coyotes. Why jeoprodize the future of hunting for no good reason? That said I think the way to go is to fist come up with a season for coyotes, then include them in the retrieval and utilization rule.
OK - let the fur fly - what do you think?
Posted by Eric C. Nuse at 10:52 AM 4 comments: