To celebrate Aldo's birthday, Jan 11, 1887, I used his and Estelle's recipe to cook up two black ducks that were recently taken near Ithaca, NY during the late season.

Called THE Duck recipe, it was passed on first to Peggy and Joe Hickey, who were close friends of the Leopolds and then to their daughter Susi Hinckey Nehis. I got the recipe from a December, 2007 article published in the Capital Times and posted on www.madison.com .

From what I can gather Aldo's grad student, Bob McCabe (Dick McCabe's father) supplied most of the ducks used by the Leopold and Hinckey.

Nehis said that she used the recipe many times. "There is no other meat I can think of that is brown and dark like wild duck. The wild, game taste is so important, and cooking it by basting it regularly with butter makes the taste indescribable, like no other purchasable meat in the world."

This time-consuming method, carefully plucking and cleaning the bird is very important," Nehis said. "The whole process is an art, more than just a meal, because of all the work and time involved." 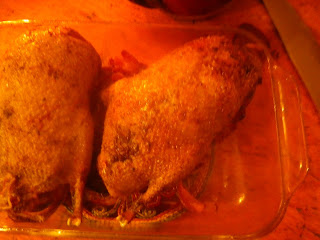 THE Duck Recipe
from the kitchen of Aldo and Estelle Leopold

First gut and pluck the birds, using poultry shears to remove the head and neck, cut the wings at the first joint, and cut through the backbone just above the oil gland and remove the tail.

Cut a green pepper into chunks (about 1/2 of a medium-size one for a mallard), peel a small onion and cut into wedges and then stuff the them into the body cavity. Sew up the vent opening and the neck opening with cotton thread. This is important as it keeps the moisture in the bird.

Put the bird in an open roasting pan. Sprinkle with salt and then generously cover the entire surface with slices of butter (about 1/2 cup per mallard) Stick the duck in a 450 degree oven.

Baste the bird every 5 minutes or so. The cooking process is hot and fast.

I cooked my two black ducks for 35 minutes and then let them rest for 10. They turned out rare, but warm, juicy but not too bloody, tender and excellent flavor. A large mallard would need another 10 minutes or so, Teal less time.

When done, rmove the string, cut the birds into halves using poultry shears and place the halves on a platter. Remove the pepper and onion stuffing and set a side.

Pour the juice over the bird and serve.

Nehis said, "I enourage everone eating the duck to use their finger to pick up the bones (especially the little legs) to chew the meat off. Too much is wasted if you only have to politely use only a knife and fork."

My 20-something daughter loved the duck. She didn't think she would like it, especially cooked rare. Her question was, "When are you going to get some more!"

After the meal I took all the bones, set a side vegetables and chewed over skin, covered it with water and made a great stock on the wood stove.

Happy birthday Aldo and thanks to you and all the folks that have followed in your footsteps for the abundant wildlife we enjoy today.

You never know - the role of luck in hunting

There is a good thread going on over at The Mindful Carnivore that I think Fair Chase Hunting readers would enjoy.
Eric
Posted by Eric C. Nuse at 12:02 PM 1 comment: