There's a thought that's been running around in my mind for a while now, but I can't seem to get it into coherent, written form.  The following opens the door for a conversation.  It is not meant to be my "final answer."
Let’s turn a cliché on its head.  Instead of proposing the question, “why do you hunt,” let’s ask, “why can you hunt?”
The latter should be a shorter discussion, filled with some arguments that are a bit more quantifiable than the emotionally loaded responses typical of the former question.  Sure, there are some relatively intangible explanations, such as preserving the “heritage” or the “traditional use” of natural resources.  And there are some that cross-over both discussions, such as the argument that the money generated through hunting is largely ploughed back into wildlife conservation.

But I also believe the conversation could shine an interesting light on some contradictory attitudes, particularly in regards to the ethics discussion.  For example, if population control is one of the key considerations for liberal hunting regulations, then doesn’t a strict, ethical high-road that effectively reduces the likelihood of the kill (the "sporting chance") run counter to that purpose?


I have a hard time getting past this feeling that a lot of hunters have bought into a package of ideals.  When I read comments from these folks, or talk to them in person, there’s a recurrent thread of uber-ethics and an insistence on doing things the hard way (at least theoretically).  There’s a disdain for taking the “shortcuts” such as baiting, food plots, or using hounds.   There’s a lot of talk about this concept of “Fair Chase.”
And I get that perspective.  Lord knows there’s nothing wrong with having a high level of respect for the animals as individuals, the animals as a resource, and for the aesthetic sensibilities of the hunter.  That’s an awesome stance, and kudos to the hunter who strives to abide fully within the tenets of fair chase and the honorable hunt.

Still, I believe you have to temper those high standards with pragmatism.  Just as most of us have personal goals in the hunt, there are other goals that are sometimes equally important.  In fact, I’d argue that in some cases, wildlife management goals should supersede the individual aesthetic.


I could hear the mental flags popping up at that last statement.  Good.
I’m not suggesting that the hunter who is strongly opposed to baiting should go out and buy a feeder.  And if you honestly feel wrong killing an animal you’re not going to eat, then you don’t have to go out and start hunting varmints and predators, or trapping for furs.  If you live in a place overpopulated with deer, but instead of filling all of your tags you really only need one deer for your larder, you don’t have to go shoot more just to donate to the food bank.


Here’s the thing, though.  Other hunters will do these things.  Many want to.  Don’t condemn them or their methods simply because their moral compass points a few degrees askew of your own.  It is legal for a reason.  If one of the valid justifications of the hunt is our role in wildlife management and population control, then someone has to do the things you may not want to do.  Or, to fall back on cliché, sometimes the ends do justify the means.

Why wildlife and wild places are so important

This address by Shane Mahoney speaking at the Idaho Wildlife summit is well worth the time to watch.
http://www.youtube.com/watch?v=JRcYwS0fibI

When she was good, she was very very good! And when she was bad . . .She was hunting?

We've come a long way, baby. Or have we?


Mary Zeiss Stange is the author of Woman the Hunter (Beacon Press, 1997), Gun Women (New York University Press, 2000), and most recently Hard Grass: Life on the Crazy Woman Bison Ranch (University of New Mexico Press, 2010). She also edited Heart Shots: Women Write about Hunting (Stackpole, 2003) and Stackpole Books' "Sisters of the Hunt" series of classic works about hunting by women, and has published widely on women's and environmental issues in both the commercial and academic press. 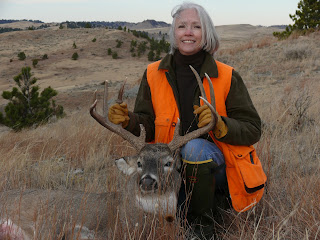 A professor of Women's Studies and Religion at Skidmore College, she teaches in the gender studies, environmental studies and international affairs programs. She divides her time between her "town job" in Saratoga Springs, NY, and the bison ranch in southeastern Montana that she and her husband Doug share with six Peruvian horses, two Springer Spaniels, a tuxedo cat and various wildlife.