From the Great Falls Tribune.com 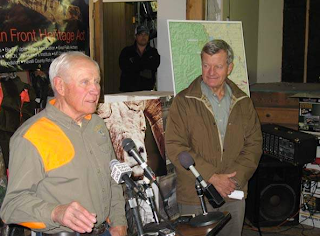 Jim Posewitz, founder and board member of Orion-The Hunter's Institute and a longtime advocate for sportsmen, introduces Sen. Max Baucus at an unveiling of the Rocky Mountain Front Heritage Act, which Baucus will introduce in Congress. TRIBUNE PHOTO/JOHN ADAMS

HELENA — U.S. Sen. Max Baucus, D-Mont., announced Friday that he will sponsor the Rocky Mountain Front Heritage Act in Congress.
The long-anticipated bill, which Baucus said he plans to introduce this session, would add 67,000 acres of new wilderness to the Bob Marshall Wilderness Complex. The measure also would designate another 208,000 acres as conservation management areas, which would limit road building but allow current motorized recreation and public access for hunting, biking, timber thinning and grazing.
More:

Green Fire, Aldo Leopold and a Land Ethic for Our Time

If you are a fan of A Sand County Almanac and Aldo Leopold, seeing this DVD is a must.
I was able to attend a screening at Sterling College with Leopold biographer, Curt Meine and film makers Ann and Steven Dunsky. The room was full of hunters, conservationists, students and environmentalists which led to a lively discussion after the film.
The essay, Thinking Like a Mountain, served as the thread that ran through the film.  Greenfire does an holistic job of tracing Leopold the man and his thinking from childhood until his death. 30 years after cutting down a female wolf and watching the "fierce green fire dying in her eyes." Leopold writes,"I thought that because fewer wolves meant more deer, that no wolves would mean a hunters' paradise. But after seeing the green fire die, I sensed that neither the wolf nor the mountain agreed with such a view."
DVD's can be ordered at the Aldo Leopold Foundation book store. More about the DVD and trailers at the Greenfire website. You will not be disappointed.

From the Thinking Hunter:

I’ve been doing some work on my notes and ideas from the Think Tank II.  I came away from the gathering wishing it had been at least one day longer.  There was a lot of free discussion about the present state of recruitment to the outdoors but I heard something that was, to me, very important for the future of hunting, and it was the simple statement that hunting would be referred to as “hunting” and not “sport hunting” or have any other adjectives affixed to it.
More:

At Times, The Token Cheap Shot Is The Fairest Play

This is a guest post written by Orion supporter Chris Clasby from Helena, Montana:

The third Saturday of Montana's 2011 duck hunting season, I crept to the edge of backwater on the Bitterroot to see what came in.  Decoys displayed and a couple practice calls later, we waited for shooting light.  Moments of silence waiting in darkness allow one's mind to wander, and mine went back to the first drake Mallard I shot last winter.  The first duck I'd shot in 20 years.  And I shot him on the water.  Then I thought about hunting ethics.

I'd shot quite a few ducks those twenty some years ago while in high school in Helena, MT, but none on the water.  Irrigation ditches in the valley north of town were late-season havens when standing water reservoirs had become ice.  Jump shooting was the strategy, and it was effective.  Enough so that I remember a double or two on rare occasion.  I had hunted with a retired friend, an experienced waterfowl hunter, who taught me the ropes and let me use one of his shotguns.

That past time had passed for twenty years and it had felt good to start again.  This was a different style of hunting, now from a blind with decoys rather than ditches, different companions, and a different part of Montana.  I wondered if my ethics and changed too, then considered again having sluiced that drake on the water and that my companions and I were fine with it.  Actually, pretty ecstatic.  I'd like to think age has refined my ethics.

The biggest change was that those years ago I was a perfectly mobile, physical teenager as capable of wingshooting as anyone equally experienced.  A car accident the following year had left me quadriplegic, and I now traverse by power wheelchair and shoot using a rifle mount aimed by chin-joystick and fired by sipping into a tube that actuates the trigger.  The motors aren't quick enough nor designed for wingshooting, so a stationary target is necessary.  In the last year I'd weighed the sitting duck situation both ways: was it the perpetual cheap shot contrary to the waterfowl hunters' moral code or do situational variables deem actions acceptable in some situations?  The latter is usually at best thin ice on the pond of moral and ethical relativity, but in this case I still feel dry.

Before making that shot, my companions and I knew that my field of shooting ranged about fifteen degrees in all directions from where my barrel pointed before birds approached.  We had strategically placed decoys on the periphery of open water toward which my gun was aimed to encourage them to land there.  I was also aware of the speed of the aiming motors -- fast enough to get to my target, but slow enough to stop on it without going past.  Finally, I knew I'd always be shooting within range of my shotgun and would be aiming at one specific duck.

Having compared the certainty of my shot to standard wingshooting, I felt comfortable with and good about having done it.  We'd used only traditional methods of allure, they were all wild ducks, and they were even given time to escape on wing as the wind of my motors brought my barrel to the target.  I was also quite certain that a standard shot pattern was more likely to cleanly kill a sitting duck than one passing on the wing, regardless whose barrel it came from.  Everything we'd done was also legal by all state and federal regulations.

While disability hunting has been an improper excuse in recent years to justify game farms, hunting inside fences, and crossbreeding, there is substance to my justification.  Ethical questions in the field consider multiple variables, and I think I passed the test.  The technology required was fairly basic, required for my participation, and surely offered me no unfair advantage.  We were hunting with hopes of but uncertain success, and it was about the experience more than the kill.  At times, the token cheap shot is the fairest play.

WCAXhttp://www.wcax.com/story/15715058/the-policy-and-politics-behind-pete-the-moose
... you have to step back and say, wait a minute-- what are the bigger implications," Eric Nuse of Orion Hunters' Institute said February 2011. ...

Celebrity moose that was pardoned by Vt. gov dies

National / World News
By DAVE GRAM
The Associated Press
MONTPELIER, Vt. — Pete the Moose, who developed a cult following with a Facebook page and a rally at the Vermont Statehouse after biologists threatened to kill him to prevent the spread of disease, has died, the state's top wildlife official said Friday.
.... A public outcry erupted, and in 2010, Vermont lawmakers crafted a compromise.
... But lawmakers reversed themselves earlier this year, saying wild animals in the state can't be privately owned and are legally a public trust, owned by all Vermonters.
More:

From the Burlington Free Press:
As Vermont mourns Pete the Moose's death, questions swirl
State officials say they were 'misled' about Pete the Moose's well-being
...“This is the prime example of why wildlife should be kept wild,” the commissioner said. “When you try to domesticate wild animals you have to undertake these sorts of procedures, and you put their lives at risk.”
...
Lawrence Pyne, outdoors columnist for the Burlington Free Press, said Pete never should have been taken from the wild.
“If Pete has one important, lasting legacy, it’s that he was the catalyst for the bill being introduced last January that established in the law that wildlife is a public trust resource that cannot be privatized,” Pyne said.

Bringing Back the Bison

SOUTH OF MALTA — Jim Posewitz is confident he will see a huntable herd of free-roaming, wild bison somewhere in Montana in his lifetime.
"We'll have to hurry, though," he said, smiling.
Posewitz is 76.
A Montana conservationist, hunter, author and promoter of hunter ethics, Posewitz has lent his voice to the National Wildlife Federation's push to have bison restored to the 1.1-million-acre Charles M. Russell National Wildlife Refuge in northeastern Montana.
"What better place, what better species and what better time?" he said.

Within the Womb of Time 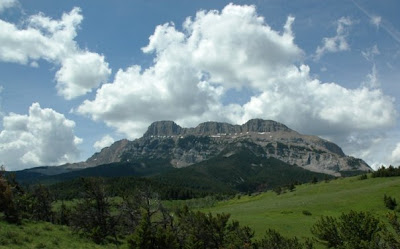 By Jim Posewitz:
Tracking a deer or an elk across a snowy Montana landscape will on occasion result in meat in the freezer and at times antlers saved as reminders of the day. There may be times however when the serious and curious hunter may elect to follow the track in reverse. That person seeks to learn the secrets held by the trail seldom followed. It is the track that will reveal where the undisturbed animal fed, where it felt secure enough to bed, and how it chose to move through difficult terrain. Likewise, American hunters also have a backtrack, a trail through time that produced the wild things and places that now fill our lives.

This is a new blog started by the Hellgate Hunters and Anglers in Helena, MT.  Orion founder Jim Posewitz and his wife, retired MT biologist Gayle Joslin are members and contributors to the blog.

The Assault on Elk: Part 1 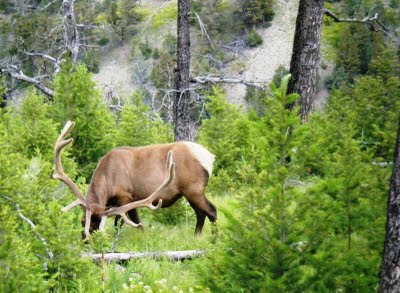 That photo is of a backcountry bull elk. It was taken by a friend of mine in a Roadless Area. Somewhere, deep in the timber, this buster is swelled up and running around trying to get as much tail as possible. He's what hunters dream about for 41 weeks out of the year.That Bull Elk is there because, long ago, Montanans made a pact to conserve and preserve the necessary habitats to ensure bulls like the one shown in the photograph, and roughly 130,000 of his kin, would always have a place to live.
More:
Posted by Eric C. Nuse at 9:36 AM 2 comments:

Contacts: Sherry Enzler, Institute on the Environment, senzler@umn.edu, (612) 625-2417
Jeff Falk, University News Service, jfalk@umn.edu, (612) 626-1720
MINNEAPOLIS / ST. PAUL (10/04/2011) —When a species such as the gray wolf is removed from the federal endangered species list, states have a legal obligation to conserve it, three scientists contend in the current issue of the journal Science.
More:
Posted by Eric C. Nuse at 2:40 PM 2 comments: