America's Pest Problem: It's Time to Cull the Herd

After nearly wiping out many wildlife species 50 years ago, Americans are once again living close--sometimes uncomfortably so--to all kinds of feral creatures. Why wildlife in the U.S. needs stronger management 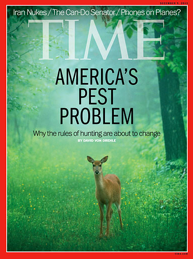 As a young Vermont Game Warden in the early '70s I wasn't called on to handle many damage wildlife complaints. Most Vermonters had the means and knowledge to take care of a skunk in the shed or a deer in the garden. That changed as new folks moved in, more land was posted and hunter/trapper numbers declined.

I remember one lady calling me complaining about beaver cutting down her trees. I asked where they were coming from - "Oh from my wildlife pond." I politely informed her that beaver were wildlife. She didn't care, she wanted them removed. I suggested a trapper could help her out, preferably during the open season when the hides were worth selling. She declined, but a month later she wanted some names and phone numbers of area trappers.

As the number of nuisance animals rose I worried that overpopulation would be a greater threat to hunting than anti-hunters or posted land. My thinking was that if deer became horned rats, who would care enough for them to be sure humans wouldn't wipe them out again? In the late 1800's it was hunters who cared, out their money up, became conservationists that lead to the recovery of wildlife in the US.

A Mass Conservation Officer told me about a hearing on overpopulated deer on Martha's Vineyard. A fellow asked why they had so many deer. The CO replied lack of hunting to reduce the numbers and good habitat with plenty of food. The guys reply was to get rid of the habitat by paving it over!

This cover story in Time was interesting to me because the author takes the stance that over populations or wildlife is driving greater hunter access, more hunters and greater knowledge of wildlife and their habitat.

I hope he is right.