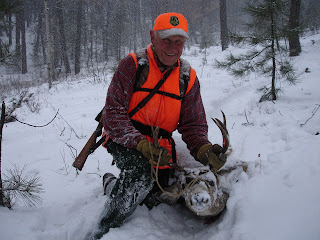 
Hunting in this creative “New World” democracy we call America is still carving a sustainable niche for itself as our rapidly evolving culture closes the first decade of the 21st Century.  A lot has happened since we became a nation in the 18th Century, declared wildlife a public resource in the 19th Century, exploited many species to near extinction in that same century, and then restored almost all the hunted species to a wonderful abundance by the close of the 20th Century.

Introduction of a hunter’s sporting code and the emergence of a conservation ethic late in the 19th Century, advanced by people like George Bird Grinnell, Theodore Roosevelt, and Gifford Pinchot, led to the restoration of a wonderful wildlife abundance.  As this was occurring, hunters gained the cultural respect of the people.  The respect was earned through the conservation investment of sportsmen; and, through the image they presented as hardy outdoorsmen in fair chase pursuit of wild, elusive, maybe even a few dangerous, game animals.  In the process, the animals pursued also acquired a value with the idea of trophy very much a part of the social value of wildlife.  In the process, wildlife trophies became symbols representing hunters gaining honor through effort and the animals too were thus valued.

As with any activity in a free-enterprise market driven economy, things of value are coveted, taken as commodities, and peddled for a price.  This was true in the 19th Century when the last buffalo seeking sanctuary in Yellowstone Park were poached for profit.  It is true today as game farmers and high-fence ranchers domesticate deer, elk, and other species for profit.  The peril is that each purchased pseudo-trophy devalues the real thing the community had come to value as totally wild and traditionally earned through personal effort.

The privatizing, commercializing and domesticating of American wildlife is not a new phenomenon.  Theodore Roosevelt spoke directly to the subject in Outdoor Pastimes of An American Hunter in 1905 when he wrote: “The professional market hunter who kills game for the hide or for the feathers or for the meat or to sell antlers and other trophies ….and the rich people, who are content to buy what they have not the skill to get by their own exertions – these are the men who are the real enemies of game.”  At the time, he was President of the United States.

On the positive side, there are still legions of American hunters in fair chase pursuit of wildlife out on the great American commons – gaining honor through effort and collecting trophies as honorable and rock solid as Mount Rushmore.  Their activity and character was described by the last president whose image we chiseled into that national icon.  Here is how TR described the hunter and the hunt:

When hunting him (wapiti) …he must be followed on foot, and the man who follows him must be sound in limb and wind.”

“…skill and patience, and the capacity to endure fatigue and exposure, must be shown by the successful hunter.”

“We knew toil and hardship and thirst…but we felt the beat of hardy life in our veins, and ours was the glory of work and the joy of living.”

“If they would only keep to rowboats or canoes, and use oar or paddle themselves, they would get infinitely more benefit than by having their work done for them by gasoline.”

“I wish to preach, not the doctrine of ignoble ease, but the doctrine of the strenuous life, the life of toil and effort, of labor and strife; to preach the highest form of success which comes, not to the man who desires mere easy peace, but to the man who does not shrink from danger, from hardship, or from bitter toil, who out of these wins the splendid ultimate triumph.”

Writing in his biography Gifford Pinchot, the father of American forestry, had cause to describe the character of TR.  While scores of biographers have written volumes trying to capture the essence of TR, it took Pinchot only nine words to describe what the man was all about.  Pinchot wrote: “He was an outdoor man – more a wilderness hunter.” TR’s observations on gaining honor through effort are as valuable today as they were the day he penned them.  The value our society places on wildlife trophies was built on the reality of what it takes to earn success afield – not really on the dimensions of the animal thus taken.  Each commercially manufactured pseudo-trophy or catered easy kill only contributes to the inevitable erosion and ultimate loss of those values.

It's what you do after the shot 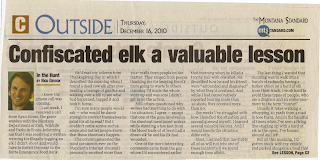 The other day a fellow came up to me to ask if I would sign a copy of my book, Vermont Wild. He then said, "You arrested me years ago for shooting an illegal deer, do you remember me?" I had to admit I didn't but if he remeinded me of the facts I might. Turned out he had shot at a legal buck, and hit a doe. He didn't realize it until he came out of the woods and his neighbor pointed out a blood trail coming down the hill. This fellow then figured out what happened and proceeded to try and cover up what had happened. With the help of good tracking snow he eventually fessed up and settled it thru court diversion.
The clipping below shows a better way to do it. Like my neighboring warden would say, "Everyone makes mistakes, but the measure of a man is what they do after." Very true...
Posted by Eric C. Nuse at 11:03 AM 1 comment:

There is a discussion going on over at the On Your Own Adventures blog about a hunting show bow hunter talking about taking a shot at over 100 yards at a deer. He claims he can make that shot constantly on targets.
My take on long bow shots is that anything over 45 yards is a no shoot, no matter how good a shot you are. At that range even the fastest bow will not get the arrow to the deer faster than it can react to the sound or sight of the arrow coming toward it. Plus all the usual problems with the animal moving just as you release,,,
Clean kill is a core ethic for hunters. We all know that lots of stuff can go wrong, but it is our responsibility to reduce the chances of a wounding shot as much as we can before taking a shot. One quote that comes to mind is, " you don't shoot to see if you can hit your target, you only shoot when you know you can hit it."
There was a variation on this in one of the hunting magazines a few years ago with a very long rifle shot and the writer justified it because it was a once in a life time trophy. Which sounded to me he valued this deer less than a normal deer by taking a much higher probability wounding shot. More likely he got sucked into the mind set that he was hunting to kill a big animal for bragging rights. It that is true, why not use poison, or napalm or a machine gun?

The Public Trust of Wildlife got a boost today here in Vermont. Both the Burlington Free Press and Vermont Public Radio had feature pieces on a new bill designed to repeal the "Nelson Amendment" that passed in the 11th hour last year that gave control of native deer and moose to the operator of a shooting park in Irasburg. When the give-a-way of our public property became known, Orion began a campaign to educate Vermonters about the public trust doctrine. Using several papers commissioned by Orion in an earlier fight in Montana, it soon was clear to hunters and many legislators that this amendment was in violation of hundreds of years of common law and case law.
We then convened a meeting of the hunter/conservation leaders and legislators to craft a coordinated plan for reversing the damage and restoring the public trust of wildlife. Representative Kate Webb and Fish and Wildlife Committee chair David Deen crafted a draft bill. After input from the group at our second meeting the bill was finalized. With over 30 sponsors and the support of Governor Elect Peter Shumlin, it appears there is a good chance it will pass. However, the owner of Big Rack Ridge is unlikely to return ownership of "his" deer and moose to the citizens without a fight. AP/Toby Talbot
Pete the moose eats leaves in a tree in Irasburg, Vt., Thursday, July 30, 2009.
Incoming Governor Peter Shumlin and other legislators are hoping to reverse a law that went into effect this year that ended up giving the owner of an elk hunting park custody of all the wild moose and deer on the property--including Pete the Moose. Burlington Free Press reporter Candace Page discusses the potential change to the law, and how it would impact Pete the Moose.
From the Burlington Free Press:
Politics and Government

geKey lawmakers and Gov.-elect Peter Shumlin are ready to reverse a 2010 law drafted in secret and passed at the 11th hour that gave an Northeast Kingdom farmer ownership of wild deer and moose on his property, an action that provoked an outcry among hunters.

Key lawmakers and Gov.-elect Peter Shumlin are ready to reverse a 2010 law drafted in secret and passed at the 11th hour that gave an Northeast Kingdom farmer ownership of wild deer and moose on his property, an action that provoked an outcry among hunters.

A bill already in draft form restates the longstanding principle that wild animals belong to all people of Vermont. It requires the wild deer and moose trapped inside Doug Nelson’s elk hunting park to be removed, probably through hunting. It also allows for protection of young Pete the Moose, an orphaned resident of the park.

THUG shotguns and TV show - you've got to be kidding!

This from the Outdoor Wire.
It makes you wonder, what are these people thinking??? Naming a series of shotguns THUG and a TV show! If some anti group smeard  us with this term the NRA would be all over them. But the marketers at Mossberg and Mossy Oak do it and we all roll over. As Pogo famously said, "We have met the enemy and it is us."

Newly appointed Secretary of the Agency of Natural Resources, Deb Markowitz,  asked me to help identify the most important atributes for a new Commissioner of the Vermont Fish and Wildlife Department and to assist in the hiring process. Today, along with former commissioner and NWF regional representative, Steve Wright, we went over the resumes' with Secretary Markowitz and narrowed the field to three. She will now interview the finalist and make her recommendation to Governor Elect Shumlin.
I was honored to be asked to assist and heartened by the openness of the process. It was also clear that comptience, experience, knowledge of the science and the people served by the Department was important. Politics was not on the list.
I have a very good feeling that the Vermont Fish and Wildlife Dept will be under excellent management come January and they will be well supported by Governor Shumlin and Secretary Markowitz.
Posted by Eric C. Nuse at 8:05 PM 34 comments: