Hunt writeup: In which the executive director of Orion gets overheated but finds himself in the right place at the right time

Had a good deer opener today.  Got out into the crow's nest at oh-dark-thirty this morning, and I was treated to a fawn parade for the first couple of hours.  First a single, then a pair, then another single, all going in different directions.  Finally at 9:30 I caught another glimpse of movement in the undergrowth, and before I knew it a good-sized buck was skipping through my window of opportunity . . .  but alas, he was moving too quickly and I didn't have the gun ready (I was glassing him with binoculars).  Sat there for a while and was kind of bummed out--I didn't see a buck all last season, so he was the first in two years.  Anyway.  One more fawn rounded out the action at 10 or so, and by 11am I was in the kitchen eating breakfast.

Because it's opening day, and because I saw that decent buck in the a.m., I figured I'd better go out into the swamp in the hopes of seeing Mr. Buck again.  I'd poked around the back forty a couple of days ago, and there was plenty of buck sign, so I'm guessing he's the local boy.

I put on my gear, turkey vest, blaze orange, and safari sling for the gun, and at noon it's down hill I go.

One minute later: I get to the mowed area below our sheds and barn, and . . .  DAMN, there he is.  Bedded down against the brush on the far side of the pond!

I duck into a crouch, and fortunately I'm screened behind some goldenrod I hadn't gotten around to mowing. Good thing I'm lazy. I am as out-in-the-great-wide-open as it is humanly possible to be--I'm in a mowed field, so there's no belly crawling off to a more covered spot, if I move, he's going to see me.  I then proceed to crouch there for the next twenty minutes, alternately eyeing him in the scope, figuring out whether I can take an offhand neck shot, and then getting the shakes and having to put the gun down.  I'm kneeling, shifting position, eyeing him through the scope again.  I'd not brought my shooting sticks, and he's so low and the goldenrod so high I can't shoot at him from a sitting position.  It's kneeling offhand or nothing.  I can't quite make his neck out enough for a really clear neck shot, either.

Time passes.  I start to get hot, so slowly I strip out of my orange vest, my turkey vest, and my coat.  Might as well be comfortable if and when I shoot.  He never moves, his head is facing east into the wind and I'm basically south of him.

I had just gotten my jacket off when suddenly a squirrel busts me and starts squawking. Mr. Buck takes notice, I see his antlers starting to swivel, and all of a sudden he gets up and stretches. 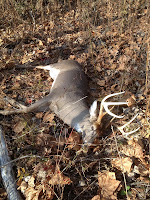 That's my cue.  From a kneeling position I aim at him broadside and shoot at him, offhand.  He goes down, struggles a bit, gets up, and then just seems to stand there looking around. I stand up and take a second shot, and he staggers off into the brush.

I reload and start following him.  I'm prepared to have him get up again and try to take off.  As I get to the edge of the pond and look into the woods, I make out his antlers--and he's down for good. He'd only gone about 20 yards. With a sigh of relief, I make my way over to him, give him a nudge, and it's over.

Go up to the house to get some help for the drag, and my daughter Julia does the honors.  She also sticks around and watches me field dress the deer--that's a first.  Not squeamish at all. Showed her the heart--the first shot clipped the top of it, while the second shot hit the hind leg, so maybe he started moving when I stood up to take the second shot, apparently I'm not much on shooting at moving targets I guess. Although once that squirrel started barking, things happened real fast, so it was all a bit of a blur. At any rate, we then pull it uphill and hoist it into the truck for the trip to the butcher.

Anyway.  Haven't written a true writeup in a while, and this one just felt like it needed it.  I was pretty damn nervous about having to take that offhand shot, but it worked out well. 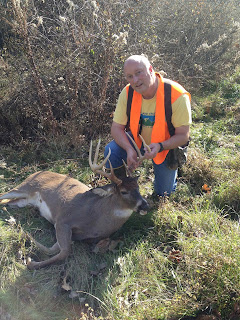