Trying to find the bright line in a pile of sand...

At the recent Orion and Backcountry Hunters and Anglers joint Board meetings this issue came up as it relates to smart rifles and other technologies. Below is a slightly edited post that was on this Blog in 2012 as it relates to canned hunts:

“A fenced shoot,” Posewitz writes, “is just the sale of a fabricated image to people who have neither the skill nor the inclination to obtain the real thing.”

Petersen agrees, and argues, “There is honorable hunting, and there is cowardly captive killing. The motivations and characters defining each are as distinct as day and night.”

Petersen is wrong.  The motivations and character of hunters are NOT as distinct as day and night.  There is no distinct line between canned hunts on the one hand, and fair chase on the other.

The difference between honorable hunting and cowardly hunting does not depend on the presence or absence of a fence.  Ideals of honor and cowardice, however, as well as ideals of fair chase, depend crucially on the hunter, and upon the hunter’s skills and aptitude.

Fair chase has traditionally been defined relative to the animal—in particular, to the animal’s ability to escape.

What’s missing in most debates about fair chase is the awareness that we need also to define fair chase relative to the human hunter—and to be specific, to the individual hunter’s ability to hunt. (And here we also know that hunters come in all shapes, sizes, interests, and abilities.)

Furthermore, we must acknowledge that there is a fundamental ambiguity to the very concept of fair chase. This ambiguity involves the philosophical problem of vagueness, a problem that has long been identified by philosophers as the sorites paradox, from the Greek term meaning “heap” or “pile.”

The paradox is this:  start with a pile of sand, and begin removing the sand, one grain at a time.  At what point does the pile or heap become a “non-heap”?

The upshot is that there is no clear dividing line between having one or two grains of sand (that might constitute the concept dust) and having a pile, or a heap, or even a mountain of sand.  Thus the very concept of heap or pile or mountain is ambiguous.

Baldness is another inherently ambiguous concept (my own baldness, however, is clearly unambiguous). Begin with a full head of hair and remove it one hair at a time. When do you cross the line from having hair to being bald? (For me, it was around the age of 20!)

So what does all this have to do with hunting?

On the one hand, or to be more precise, on one end of the spectrum (and spectrum, a term from physics, is exactly the right term to use) we have hunting practices that are clearly akin to a single grain of sand or to my gloriously bald pate.

To illustrate the point: imagine a deer chained to a post in a 10’x10’ chain-link enclosed pen, being shot at close range. Clearly this is not fair chase:  the deer has no ability to avoid death, and the hunter needs no ability at such close range either to pursue or to shoot the tethered animal.

Remove the tether.  Now the deer is in a 10 x 10 enclosure, but can move around.  Is this fair chase?  Clearly the hunter is at more of a disadvantage than in the first scenario: the deer may jump at precisely the same moment as he/she squeezes the trigger, and the hunter may wound the animal or possibly even miss entirely.  It may take two shots to bring the animal down, particularly for a poor marksman.

Does this second scenario constitute fair chase?  Clearly not, the animal is still enclosed, and little to no skill is needed on the part of the hunter.

Let us now imagine that we expand the enclosure—how about a full acre?  And while we are at it, let’s add an acre’s worth of brushy vegetation.  The deer has the ability to roam about, but the hunter must still stay out of the fence to shoot the animal.

All the hunter need do in this case, is wait patiently for the deer to come along within view inside the fence, and take a killing shot.

Is this fair chase?  Probably not, although now the lines are getting a little more fuzzy.  How does waiting outside the fence differ from an archer sitting and waiting in a tree stand?  But I’ll leave that question for another essay.

Let’s keep going, trying to get closer to fair chase.  Let’s put a gate in the fence, and allow the hunter to enter and pursue the animal within the one-acre confines of the enclosure.  The animal can still move around and has plenty of early-successional shrubland (let’s go ahead and fill the enclosure with thorny multiflora rose and honeysuckle) in which to hide.

Now it takes the hunter the better part of a morning to locate, stalk, and shoot the deer.  But after several hours of patient stalking, the hunter is successful.

Does this “hunt” now constitute “fair chase”?  Observe that we have come a fair way from shooting the animal that was tethered inside what was essentially a dog pen.

Most hunters still would not be comfortable labeling the one-acre stalk on a deer--multiflora rose or not--as a fair chase hunt.  And yet notice that some hunters might . . . .  We can imagine hunters with disabilities, for example, who might be content with such a one-acre stalk if confined to a wheel chair. Or a young hunter, just starting out, may appreciate and learn from such an experience. 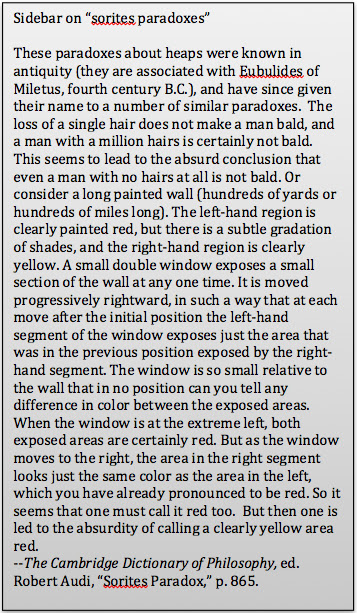 Note that I am not implying that this necessarily would be a good hunt, for young hunters or hunters with disabilities.  I am simply suggesting that the hunt might provide sufficient challenge to each individual hunter, and each hunter might possibly go home satisfied with their hunting experience.

Now let’s continue the sorites part of our thought experiment.  Let’s rerun the thought experiment a thousand times, adding one additional acre with each repetition.  First the hunter pursues the deer in a two-acre enclosure, and then in a three-acre enclosure . . . and so on, and so on, and so on.  (And let’s, for the sake of argument, assume there is only a single, individual deer to be pursued—not legions of overpopulated deer as occur in many areas of the country.)

At what point does the enclosure become large enough that we cross a line between canned hunting and fair chase?

So now let’s just remove the fence.  And imagine the same, solitary, single deer roaming about unrestricted over a 20,000-acre, or 50,000-acre, fenceless area.  Would this hunt now constitute fair chase?

I’m pretty sure if you plunked down a hard-core deer hunter, and took away his tree stand, and made him stalk a single deer over 50,000 acres (that’s 78.125 square miles!), he or she would most likely call that a fair chase hunt.

While I myself might never hunt a captive animal in a high fence setting, unlike David Petersen I am not about to tell someone else that they should not do so.  As long as a hunter conscientiously strives for a clean, quick, one-shot kill, and does so safely while respecting the law, then that hunter acts ethically and morally.

____________________________
Jim Tantillo is the Executive Director of Orion, The Hunters’ Institute. He has M.S. and Ph.D. degrees from Cornell University, where he currently also teaches ethics and environmental philosophy in the Department of Natural Resources.

A grouse hunting purist, Jim will generally argue until he is blue in the face that the One, True, Correct Way to Hunt Grouse is with a 16 gauge Parker double gun over the staunch point of a well-trained English setter.  In the spirit of political toleration, however, he also argues until he is equally blue in the face that his retriever- and spaniel-owning friends be permitted to hunt grouse legally as they see fit, despite their aesthetically misguided preferences for flushing dogs or 12 gauge autoloaders!

A Caretaker and a Killer: How Hunters Can Save the Wilderness

From the Atlantic on line by Tovar Cerulli, co-chair of the Back Country Hunters and Anglers

Stereotypes of gun-toting brutes and tree-hugging hippies miss the basic facts about who is protecting nature—and why.
Tovar Cerulli Mar 14 2014, 10:12 AM ET
7
inShare
More

For those that are "Condemed to the core of relentless citizens" advocating for conservation.

Get a cup of tea, pull up a chair and soak in this mindful video from Shane Mahoney at Pheasant's Forever's Rally for Conservation: