Long range shooting - ethical or not?

I recieved this message from a long time hunter ed instructor from Ontario. He is also on the board of directors for the International Hunter Education Association (IHEA) and very active with the Ontario Hunter's and Angler's Association.

I was just down at the IHEA winter board meeting (got invited back on as the Canadian Volunteer member could not fulfill his obligations due to work commitments) and in what I am seeing on the Wild Channel and all the hunting shows and what is available at the Shot Show, big 50 cal rifles etc. and people making incredible 400 – 1000 yd shots on animals we should really be discussing where the element of Fair Chase comes in here as well as dispelling the myth that most people hunt for the thrill of the chase and not just the kill. When you kill an animal from 4-8oo yds there is no fair chase, you do not match any of your abilities against the animals as he can’t see, hear or wind you and to shoot him at that range definitely disproves the fallacy that the kill is not important. When done at long range the only important thing to most is the kill and the trophy. I don’t dispute the fact that these are incredible shots and shooters who have honed their shooting skills and deserve credit for this, but they can also prove their abilities on paper targets rather than live ones if they have a true belief in “Fair Chase” and that the kill is not important. Technology is destroying real hunting and begs the question “ are bow hunters the only true hunters left” and they even have their issues of range? 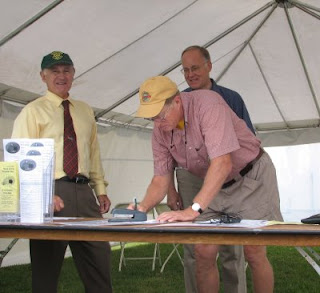 Please take a minute and read Roy's piece published in the 1/14 edition of the Rutland Herald. Roy is the President of the VT Federation of Sportsmen's Clubs and on the steering committee of the VT Wildlife Partnership.

After you read it I hope you will join me and other serious sportsmen/conservationists and talk to your local legislators about continuing equitable support for the wildlife we love and the agency that makes sure the critters stay healthy - the VT Fish and Wildlife Dept. The division that is getting hit the hardest are the local Game Wardens. Before the latest Douglas Administration budget cuts, there were fewer Wardens than in 1971, and with the latest cuts it's going to get a lot worse.
In the last 2 1/2 years the Department has been forced to leave nearly $4 million dollars unclaimed because they did not have the state money to match the Federal dollars that we were eligible to collect. One dollar would have meant 3 additional federal dollars! Where else can you get a return on your money like that. Even the crooks on Wall St weren't doing that well.
As you can tell I'm not happy that our government is throwing desperately need money away at a time of economic free fall and climate warming stress on the environment and our wildlife.
Read and weep - then get on the phone and let Douglas and your representative and senators know what you think. Don't let them soft talk you with the old milk for babies or browse for Bambi argument. The FWD is one of the few entities in state government that makes money - 82% of their budget, but also generates nearly $29 million in sales and rooms and meals tax for the general fund. What do they get back to invest in the resource? $2.1 million budgeted, minus $800,000 already cut and more coming unless we tell them no. NO more cuts this fiscal and get going on long term, fair funding for the Department as suggested by the 2007 Legislative funding committee and advocated by the VT Wildlife Partnership.

Time to get serious about wildlife

These are extraordinarily difficult economic times. On that, all Vermonters agree. Published: January 14, 2009 (

For more on the long term solution go to http://www.vermontwildlifepartnership.org/

What frame does the word hunter evoke for folks who are not active hunters themselves?

A frame is a mental image that subconsciously arises when we hear a word or phrase. An example of it's power is "don't think of an elephant" I bet you all saw an elephant in your imagination, even though the statement said don't think of one. I suspect the mental picture of the hunter by a hunter is different than for a non-hunter and way different than an anti-hunter. I'm interested in what the picture is for folks that haven't thought much about hunting.
What do you think? If you could ask a few friends or folks at work I'd be interested in the picture that first pops up.
This is one of the topics at a weekend think tank I'm facilitating at the Max McGraw Wildlife Foundation this weekend.
Thanks!

Wake up America - squirrel for supper is the hot trend in England.

New Camo what does it mean for safety? 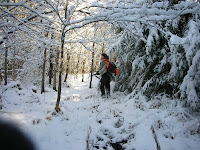 The Gore company has developed a new camo that appears to make you invisible to deer and to hunters. Check it out at the Science of Nothing or http://www.optifade.com/ Skip to the 2nd and 3rd videos. It is pretty amazing.
The question it raises to me, being the old hunter ed instructor, is what does this mean for hunter safety. We are already seeing a rise in mistaken for game shootings during bow season with the current generation of camo. Also, Vermont has no orange law during rifle season, and more folks wear camo than Darwin's survival of the fittest should allow for. Once this new generation of digital camo gets out there it will become very difficult to "be sure of your target and beyond" no matter how conscientious and safety minded you are.
Seems to me it is time to get ahead of this increasing problem and require orange during deer rifle season and while small game hunting. Coupled with this should be experiential training during basic hunter education class and outreach/advanced training for seasoned hunters, covering defensive hunting It could be easily blended in with the Successful Hunting seminars that have been piloted by myself, Orion and VT Hunter Ed in Stowe and Putney.

Is it time for Vermont's Apprentice hunting effort? 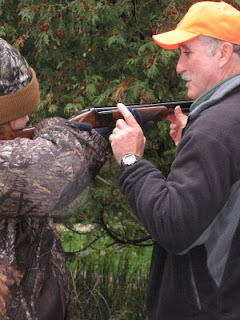 From the NSSF Bullet Points:
ARIZONA OFFERS APPRENTICE HUNTING LICENSE AT NO CHARGE . . . Effective Jan. 1, the Arizona Game and Fish Department is offering a new apprentice hunting license at no charge to encourage existing hunters to become mentors and introduce a friend, neighbor, relative At the 2006 Future of Hunting in Vermont conference in Castleton we agreed to move forward with an apprentice hunting license so people of all ages could "try" hunting under the direct supervision of a licensed adult hunter. So far there has been no action.
It seems to me the time is now. We need more support for hunting and we need more new hunters for their political and financial support. What are we waiting for Vermont?
Posted by Eric C. Nuse at 7:42 PM 5 comments:

Where have the hunters gone?

I recommend reading "It's the Culture" from Delta Waterfowl. They do an excellent job of pulling together lots of the research on the decline in numbers of hunters and propose a holistic approach to turning it around. Well worth the time.